Vancouver is a coastal seaport city on the mainland of British Columbia, Canada. The 2011 census recorded 603,502 people in the city, making it the eighth largest Canadian municipality. The metropolitan area, with more than 2.3 million residents, is the third most populous metropolitan area in the country and the most populous in Western Canada. With 5,249 people per square kilometre (13,590 per square mile), the City of Vancouver is the most densely populated Canadian municipality among those with 5,000 residents or more. Vancouver has one of the mildest Canadian climates and is located only 38km north from the US border. Vancouver is one of the most ethnically and linguistically diverse cities in Canada; 52% of its residents do not speak English as their first language. To learn more about Vancouver you can also check out very nice video and PowerPoint presentations.

The original settlement, named Gastown, grew around the Hastings Mill logging sawmill and a nearby tavern, both established in 1867. Enlarging to become the townsite of Granville, with the announcement that the railhead would reach the site it was renamed "Vancouver" and incorporated as a city in 1886. By 1887, the transcontinental railway was extended to the city to take advantage of its large natural seaport, which soon became a vital link in a trade route between the Orient, Eastern Canada, and London. As of 2009, Port Metro Vancouver is the busiest and largest port in Canada, and the most diversified port in North America. While forestry remains its largest industry, Vancouver is well known as an urban centre surrounded by nature, making tourism its second-largest industry. Major film production studios in Vancouver and Burnaby have turned Metro Vancouver into one of the largest film production centres in North America, earning it the film industry nickname, Hollywood North. 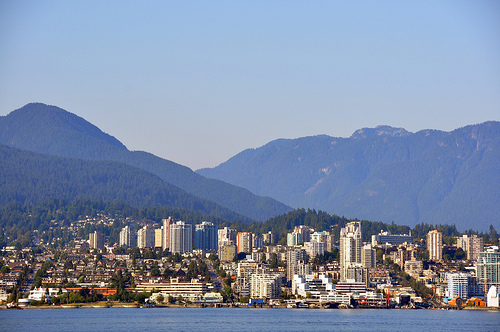 Vancouver - ocean and mountains in one place

Vancouver was the Host City for the 2010 Olympic and Paralympic Winter Games. In February and March 2010 athletes and spectators from around the world gathered in Vancouver and the alpine resort of Whistler to celebrate winter sporting excellence. The 2010 Winter Games, along with the region’s spectacular natural playground and its vibrant venues, put Vancouver in the spotlight as a premier destination. 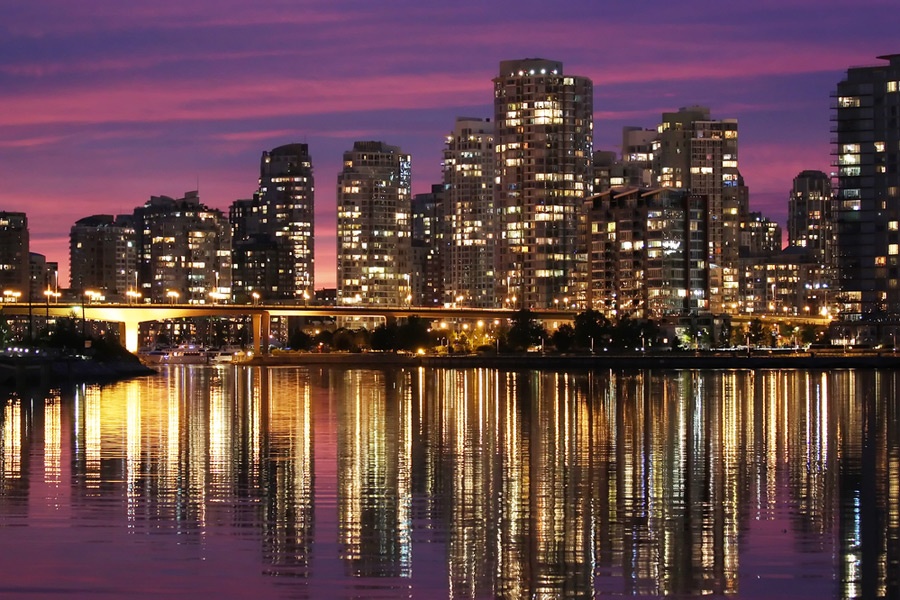 Vancouver is fast becoming known as one of Canada’s best dining destinations. In fact, Food & Wine magazine named Vancouver as one of the top ten culinary destinations in the world in 2008 along with cities such as New York, Paris and Tokyo. “The number of truly outstanding restaurants in Vancouver is astonishing, and the prices are ridiculously low when compared to other food capitals...” The New York Times. Vancouver was the only Canadian city voted “One of the Top 10 culinary destinations in the world” by Food & Wine Magazine.

Some of our fine dining restaurants can be found throughout the Greater Vancouver area here is a map of but a few. 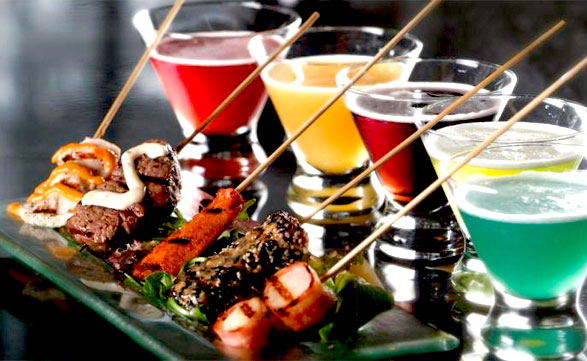 Enjoy the excellent food in Vancouver 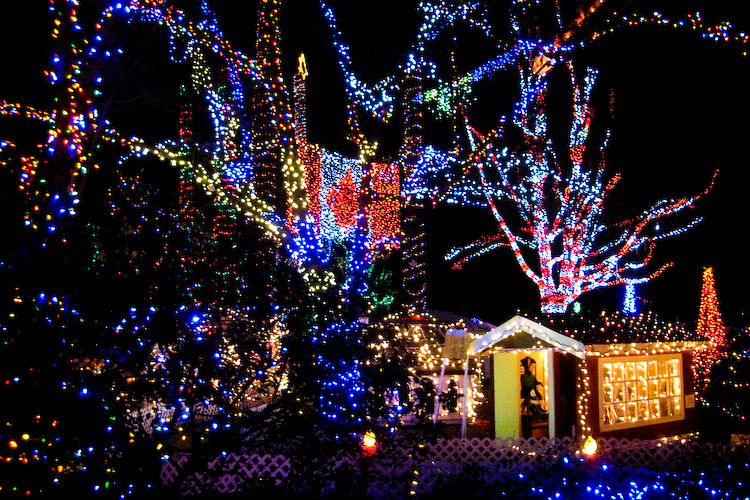 Vancouver represents the perfect blend of the modern architecture and nature. There are many wonderful parks where visitors can relax and enjoy in the most beautiful sights. Hiking, biking, kayaking, whale watching are just a few of the many available outdoor activities. Vancouver has many sightseeings that should not be missed like Vancouver Aquarium, Vancouver Art Gallery, UBC Museum of Anthropology, Telus World of Science, Vancouver Lookout, Capilano Suspension Bridge Park, or Grouse Mountain Resort. There are also many nearby sightseeings that are very popular like Whistler, Victoria and Vancouver Island, Fraser Valley, Thompson Okanagan Valley. 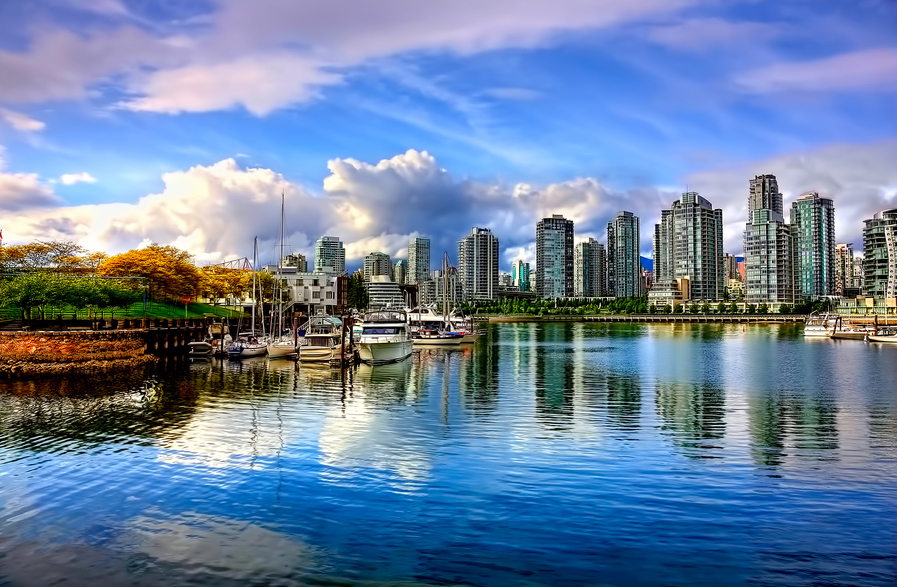 The Vancouver Aquarium (officially the Vancouver Aquarium Marine Science Centre) is a public aquarium located in Stanley Park in Vancouver, British Columbia, Canada. In addition to being a major tourist attraction for Vancouver, the aquarium is a centre for marine research, conservation and marine animal rehabilitation. The Vancouver Aquarium was one of the first facilities to incorporate professional naturalists into the galleries to interpret animal behaviours. The aquarium covers approximately 9,000 square metres and has a total 9,500,000 litres of water in 166 aquatic displays. There are a number of different galleries, several of which were built at different times throughout the aquarium's history. The Vancouver Aquarium currently houses around 300 species of fish, almost 30,000 invertebrates, and 56 species of amphibians and reptiles. They also have around 60 mammals and birds. 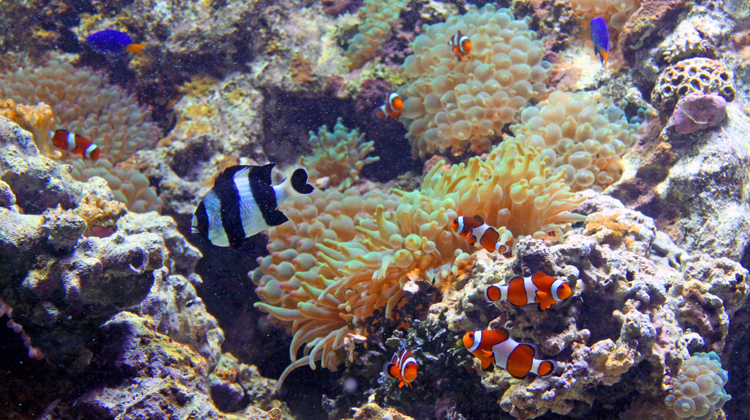 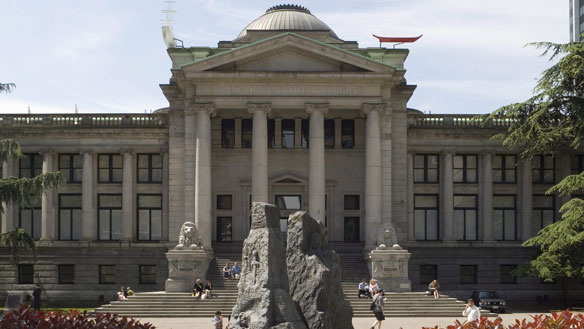 The Museum of Anthropology at the University of British Columbia (UBC) campus in Vancouver, British Columbia, Canada is renowned for its displays of world arts and cultures, in particular works by First Nations peoples of the Pacific Northwest Coast First Nations. As well as being a major tourist destination, MOA is also a research and teaching museum, where UBC courses in art, anthropology, archaeology, conservation, and museum studies are given. MOA houses 38,000 ethnographic objects, as well as 535,000 archaeological objects in its building alone. This Museum includes a number of large sculptures, totem poles, and cultural artifacts. Although MOA's focus is on the First Nations of the Northwest Coast, the collection of 38,000 ethnological objects includes objects from all continents. The most iconic object in the Museum is probably the yellow cedar sculpture The Raven and the First Men by Bill Reid, which is depicted on the Canadian twenty-dollar bill. 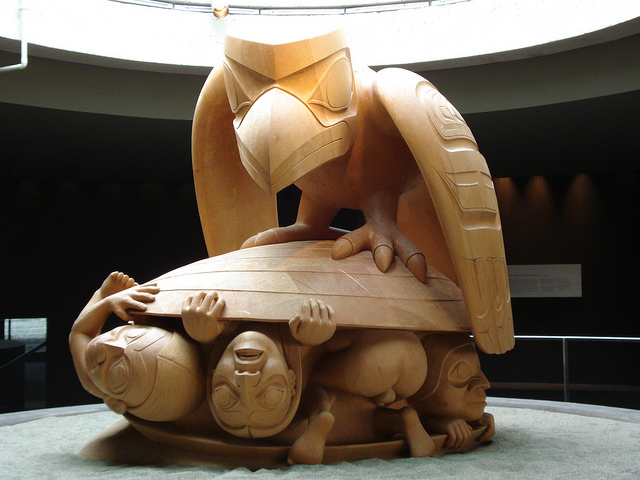 The Raven and the First Men sculpture

Harbour Centre is a notable skyscraper in the central business district of Downtown Vancouver, British Columbia, Canada. The "Lookout" tower atop the office building makes it one of the tallest structures in Vancouver and a prominent landmark on the city's skyline. With its 360-degree viewing deck, it also serves as a tourist attraction, offering a physically unobstructed view of the city. Designed by WZMH Architects, the building is listed as being 28 stories tall, though the tower/observation deck extends above the 28 office floors (claimed to be approximately 44 stories in total). Glass elevators whisk visitors 168 meters (553 feet) skyward from street level to the Observation Deck in 40 seconds. 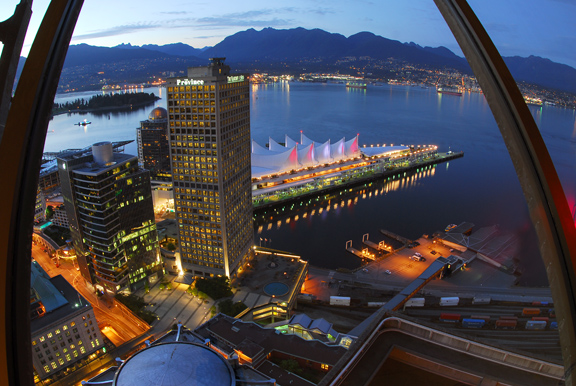 View from the Vancouver Lookout

Lynn Canyon Park officially opened to the public in 1912 and has been a popular destination among tourists and local residents ever since. Lynn Canyon Park is a great location for a family picnic, a leisurely hike, or a refreshing swim in one of the many popular swimming holes.

Lynn Canyon Park has grown from 12 acres in its early years to 617 acres today. Lynn Canyon Park contains second growth forest with most of the trees aged approximately 80 to 100 years old.

Lynn Canyon Park features a suspension bridge that sways 50 meters above the canyon. It was built privately in 1912 when the park opened. Lynn Canyon also offers a selection of walking and hiking trails that connect to other parks in the region such as Lynn Headwaters, Rice Lake, and Inter River Park. 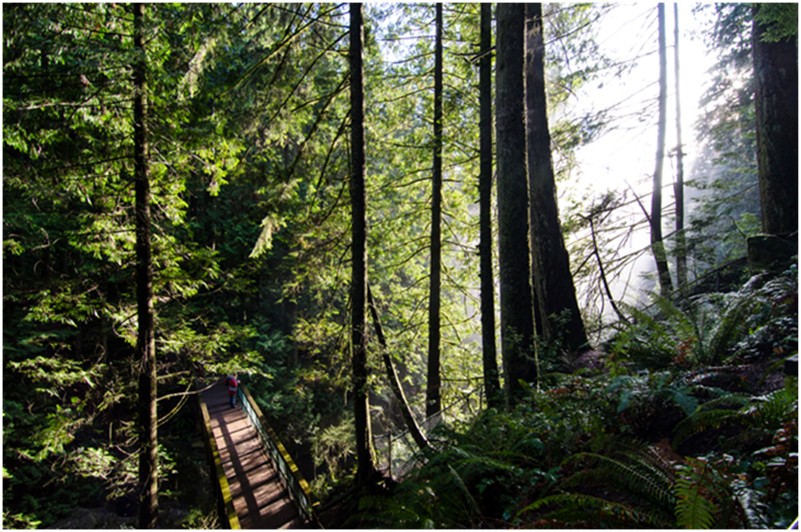 Deep Cove is a community of local people interested in the environment and enjoying life. Here activities such as ocean sports, parks, trails and quick access to the mountains. Deep Cove Residents believe in heritage, theatre, organic foods, music, family get-togethers and daydreaming. They invite you to come on out, grab a cappuccino, drop your kayak into the calm waters or your mountain bike on a trail or kick back on the beach, stroll along the walking tour, take in a play, and enjoy fine dining at one of their local restaurants. 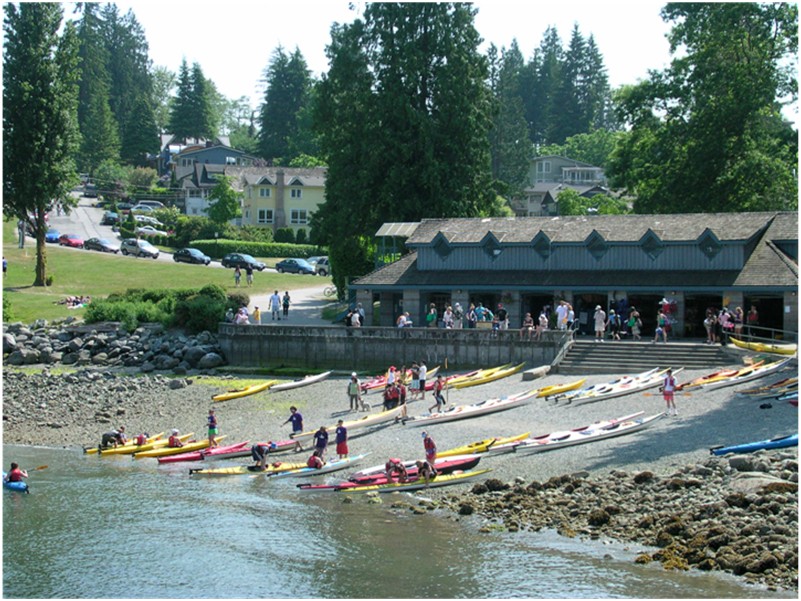 The Capilano Suspension Bridge is a simple suspension bridge crossing the Capilano River in the District of North Vancouver, British Columbia, Canada. The current bridge is 140 metres long and 70 metres above the river. It is part of a private facility, with an admission fee, and draws over 800,000 visitors a year. The bridge was originally built in 1889 by George Grant Mackay, a Scottish civil engineer and park commissioner for Vancouver. It was originally made of hemp ropes with a deck of cedar planks, and was replaced with a wire cable bridge in 1903. In 1910 Edward Mahon purchased the Capilano Suspension Bridge. "Mac" MacEachran purchased the Bridge from Mahon in 1935 and invited local natives to place their totem poles in the park, adding a native theme. In 1945, he sold the bridge to Henri Aubeneau. The bridge was completely rebuilt in 1956. The park was sold to Nancy Stibbard, the current owner, in 1983. 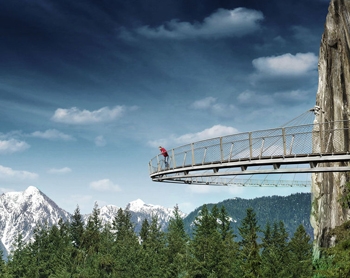 Stanley Park is a 404.9 hectare urban park bordering downtown Vancouver, British Columbia, Canada. It was opened in 1888 by Mayor David Oppenheimer in the name of Lord Stanley of Preston, the Governor-General of Canada. It is more than 10% larger than New York City's Central Park and almost half the size of London's Richmond Park. The park attracts an estimated eight million visitors every year, including locals and tourists, who come for its recreational facilities and its natural attributes. A paved 22 kilometres seawall path circles the park, which is used by 2.5 million pedestrians, cyclists, and inline skaters every year. Much of the park remains forested with an estimated half million trees, some of which stand as tall as 76 metres and are up to hundreds of years old. There are approximately 200 kilometres of trails and roads in the park, which are patrolled by the Vancouver Police Department's equine mounted squad. The Project for Public Spaces has ranked Stanley Park as the sixteenth best park in the world and sixth best in North America. Stanley Park contains numerous natural and man-made attractions that lure visitors to the park. Unlike other large urban parks, Stanley Park is not the product of a landscape architect, but has evolved into its present, mixed-use configuration. 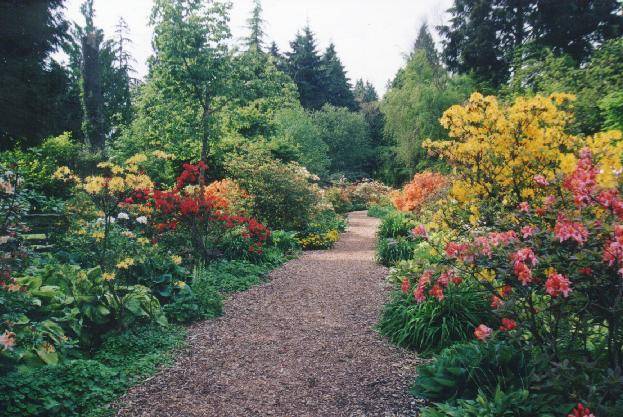